There are two passages that jointly reveal God’s attitude towards homosexuals. Both tell a story that should reflect Jesus’ actual attitude toward homosexuality but, because of bad translation, does not: Matthew 8:5-13 and Luke 7:1-10. 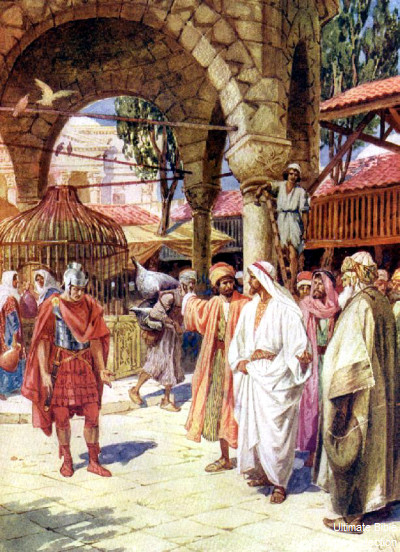 In these two, a Roman centurion came or sent word to Jesus begging him to heal someone he cared about. Jesus said he would come to the centurion’s house, but the centurion said he did not deserve such an honor – he believed that if Jesus just said the word, his servant would be healed. Highly praising the man’s faith, Jesus pronounced the servant healed.

In Matthew, the word that the centurion used for his sick servant was pais. This word could mean ‘son’ or ‘boy,’ ‘servant’ or ‘slave,’ or ‘junior/younger male partner.’

Luke is more specific in his description of the sick man; he calls the man the centurion’s entimos doulos. The word doulos generically means ‘slave;’ it could not mean son or boy. Entimos means ‘honored’, so the combination would produce the contradiction of ‘honored slave,’ meaningless unless it applied to a ‘junior or younger male partner.’ Thus the meaning of pais in Matthew is limited to the partner in a same-sex relationship (reputedly, the shield bearers for Roman soldiers were their lovers). In the only example in the Bible where anyone asked for healing for a slave, Jesus was not only healing for a conquering overlord, he was healing his male partner.

Jesus’ response ignores the man’s powerful, hated position and the implied sexual relationship; instead he highly praises the greatness of the man’s faith. By implication, love is not degraded by who shares it; and the model the world has been given to strive for in faith is that of a gay man. No matter what ignorance and attitudes homophobes thrust at you, keep firm in your mind that – because you are aware of Jesus’ real attitude towards you – you have an obligation to live up to the model of faith this tale holds up for you.

Jack Clark Robinson, one of many researchers, has done a thorough study of this biblical story.

If you have persevered through all the previous sections of this site, there is only one more: Conclusions. This final page goes beyond specifics to provide a summary, with an overview of the subject.