Who is it that commits abuse of the Bible and directs it at you?

Contact with such people is often unpleasant at best, so here, for a change, you can have it with a little humor.

The protestors look normal, if a bit humorless, right?

Don’t underestimate such people. Irrational commitment to dogma does not automatically make you stupid. There are plenty of sermons about homosexuality on the Internet that you can listen to, spoken by what are otherwise apparently well-informed, intelligent, fairly eloquent, apparently objective people, yet many of these become almost rabid when faced with gays. What is it that makes some of them react so viciously to homosexuals?

Put another way, how can people justify hate behavior? For explanation, many would first suspect their belief system. To be sure, this is not very fertile soil – but in dealing with opponents, the best place to start is what they believe (or, at least, what they say they believe).

In justifying themselves, people who are anti-gay uniformly give a single response when asked why being gay is so bad: “Because the Bible says it is an abomination.”

This is, indeed, usually the end of the discussion; the response is an unreasoned one, not ever having been subjected to serious examination (and certainly not based on study of what the Bible actually says in the original, as this site shows elsewhere).

If pressed, though, some people can add a little to the immediate ‘abomination’ answer. When they do this, their reasons fall into five natural groups.

These particular categories, though not necessarily the discussion of them, originate with Scott Bidstrup.

This is a sham argument having nothing to do with nature or anything that happens in it. Skyscrapers, toilets, medicine, fertility treatments, and clothing do not occur in nature. Cannibalism does occur, as does monogamy, but both are rare and could be considered un-natural.

On the other hand, homosexuality has been observed in perhaps 30% of species which have been studied. In Biological Exuberance: Animal Homosexuality and Natural Diversity, Bruce Bagemihl discusses the homosexual activity that has been documented among 450 different species of animals, showing that it is clearly a ‘natural’ part of sexual diversity.

Bagemihl, Bruce, Biological Exuberance: Animal Homosexuality and Natural Diversity, New York: St. Martin's Press, 1999. For a light touch, you may want to check out the New York Times article “Love That Dare Not Squeak Its Name.”

The reality is that the absence of homosexuality would be unnatural. And it seems to occur in all cultures, without regard for the norms of a culture.

This is little more than a variation of the  argument above, just with a religious cast to it. As such, of course, it has no place in a society committed to the separation of church and state; in such a society the moral basis for law rests on the benefits to society from instituting a law, not from some predetermined religious system.

This argument is, of course, purely religious; without specifically stating the fact, it maintains that homosexuals ought to be bound by the particular religious principles of the proponent, whatever they may be. And, yes, these differ dramatically. Why? When the first parts of the Bible were written down 2900 years ago, people were using a vocabulary (there are 30,000 words in the Bible) that was half the size of an educated person’s today (60,000, not including technical terms); and neither the vocabulary nor the scientific approach existed to make precisely scientific descriptions and explanations an option for people of the time. Language simply had to be metaphoric.

The result is that determining exactly what God’s Law is is a real challenge. Furthermore, the languages that God’s revelation to His people was originally written in – Hebrew, Aramaic, and Greek – have changed so much since the original writing that even these languages’ modern equivalents require translation of the scriptures.

Aramaic provided the Hebrew alphabet and was used for sections of Daniel and Ezra. There are only about 400,000 speakers left who speak sometimes mutually unintelligible dialects of Neo-Aramaic.

Aramaic was Jesus’s native language. In Mark, his words on the cross “Eloi Eloi lama sabachthani?” translated “My God, my God, why have you forsaken me?” appear to be an Aramaic translation of the first line of Psalm 22. The same line in Matthew begins “Eli Eli,” a translation of the original Hebrew into the Hebrew spoken at the time.

Fortunately, a comparison of the Dead Sea Scrolls with the oldest texts we had before their discovery shows that the effects on meaning of a thousand years of copying have been minor. Still, the task of deciphering God’s law remains. As you will see, God’s law is silent on the subject of homosexuality, no matter what you have heard.

Hello? Has anyone ever looked at the families in the Bible? There are Adam’s (one son murders the other), Abraham’s (whose wife gets a servant pregnant by Abraham and then mistreats her), Jacob’s (he stole his brother’s birthright), Jephthah’s (he had to sacrifice his only child to God in return for victory in war), Saul’s (he goes crazy), and David’s (he gets his general killed so that he can have his wife, and his son Amnon rapes his daughter, Tamar). At best, these are dysfunctional examples of family values. And Jesus says that he is come to set father against son and mother against daughter.

This would apply equally well to sausage being made or animals being slaughtered, not to mention how homosexuals react to breeder sexual activity. Irrelevant smoke screen. 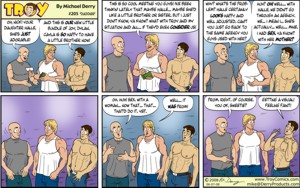 Having looked at what people say they believe and having found it wanting, it is time to consider more systematic theology.

As will be discussed elsewhere, theology is essentially irrelevant to people’s reaction to gays; anti-gay prejudice really has its origins entirely independent of any theology. But a proper exploration of the homophobe involves an investigation into the theological stance that is sometimes offered to justify hate and violence – certainly psychological violence. Understanding homophobia involves understanding the cover stories.